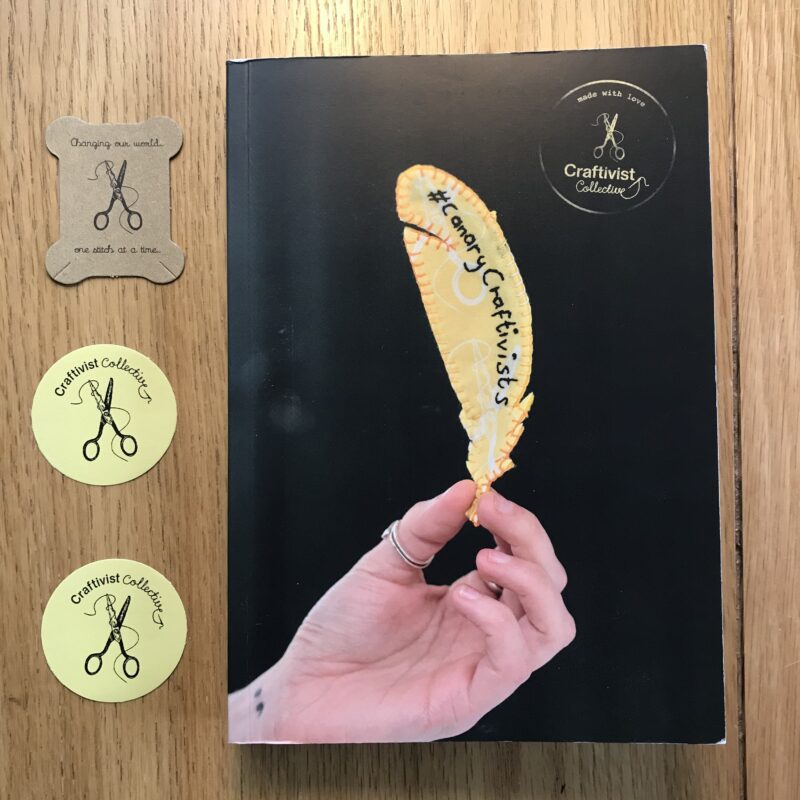 I’ve written before about the work of Sarah Corbett and the Craftivist Collective – I really admire the commitment to principles of gentle protest and the level of thoughtfulness that’s goes into the approach. In my view, while it’s easily dismissed by some it’s a unique but vital form of campaigning.

The movement’s most recent campaign, Canary Craftivists, appeared on my social media timeline throughout 2021, and I think it was one of the most interesting and original pieces of activism that I’ve seen for a while.

One of the benefits of being a patron of the Craftivist Collective (and I’d really recommend becoming a patron, for £10 per month you are supporting this important campaigning ) is that I recently got sent a copy of the #CanaryCraftivists Manual – which is a beautifully curated guide on how to run the campaign. Even if you’re not into crafting I’d really encourage getting hold of a copy as it brilliantly unpacks the Craftivist approach.

As Sarah explains the idea behind the approach was two-fold for “participants 1) organise a small gathering of craftivists as a ‘flock’ to hold a stitch-in by a loved local landmark and invite the local press to cover it and 2) handcraft a life-size canary and a personal letter for their local politician or other local powerholders urging them to do more and faster for the environment“.

During 2021, the reach of the campaign was really impressive, especially when you consider that it’s driven by a one-person team at the center of the Craftivist network – with 99 flocks came together across the UK, securing lots of local media coverage, seeing canaries sent to almost 200 MPs and achieving stacks of reach on social media.

And I think there are lessons that all campaigners can learn from the success of Canary Craftivists, here are just a few;

Plan for your engagement with decision makers to be both memorable and thoughtful – each individual was encouraged to take the time to handstich and name a canary and send it to their local MP.

We know that every day MPs will receive hundreds of pieces of correspondence, from email, to letters to phone calls so the canarys really got noticed. The feedback from MP suggested that the carefully and thoughtfully stitched canary complete with letter will cause them to pause and not just respond with a pre-written response.

In few campaigns that I seen have seen such a stream of such considered correspondence from MPs and their staff who have recieved their canaries as exampled below – as another MP wrote ‘my whole team were awed by the kindness and the effort that you put in‘.

It’s evidence for a hunch that I think most campaigners hold – that MPs are more likely to engage for longer with something that has taken time for the sender to put together with thought – a reminder that with a bit of careful thought you can come up with a campaign idea that really makes a lasting impression.

If you want to support more amazing activism from the Craftivist Collective you can find out more about becoming a patron here.