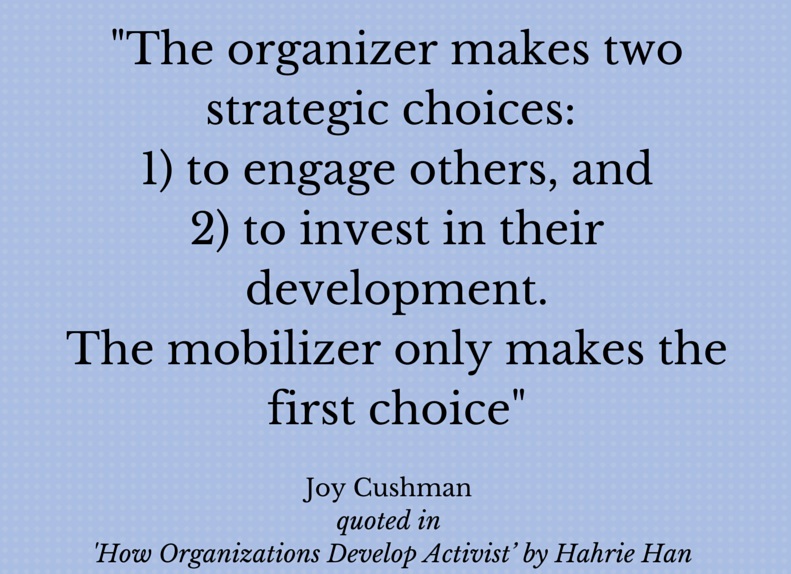 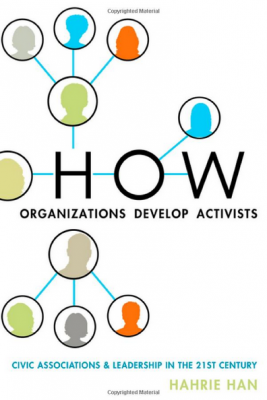 Since reading it last year, I’ve been telling anyone who’d listen about why they should read Hahrie Han’s book “How Organizations Develop Activist“.
So I was delighted to be asked to contribute to a special Mobilizing Ideas dialogue on the book. A extract from my review is below, but I’d encourage you to head across to the Mobilizing Ideas blog to read the rest of my review and some cracking contributions from other brilliant organisers and academics.
Han has turned her lens on what she describes as national associations, which appear to be organisations with longstanding programs of grassroots work linked with grasstops influencing, neither mentioned by name but one working in health and the other environment, but you get the impression the lessons are widely applicable.
While there are certainly difference between our approach to grassroots campaigning in the UK to the US, for example less of a focus on state/local level activism, we’re generally keen to learn from trends in the US, and while enjoying the book I was reminded of the lessons from Theda Skocpol’s study on why the push to get action on climate change in 2010 failed in part because it focused too much on grasstops lobbying, rather than the slow work of strategically building power, a sobering lesson for any organisation that nurturing your grassroots matters.
Turning the pages, in the book Han hits the sweet spot in the challenges anyone who works with local chapters or groups. The characterisation of groups being categorised into 3 types, Lone Wolves, Activists and Organiser rings true for anyone who’s been involved in working with local groups.
Lone Wolves being those who chose to ‘to build power by leveraging information — through legal briefs, public comments, and other forms of research advocacy’ while ‘mobilisers and organizers, by contrast, choose to build power through people’.
For many its easy to see activism and organising as the same, but as Jim Coe points out in his review of the book that the ‘two strategic models are in fact based on radically different philosophies and approaches’.
This central idea is one that I found most challenging in the work that I do. I often find myself using the words interchangeably, but as Joy Cushman suggests in the book “The organizer thus makes two [strategic] choices: 1) to engage others, and 2) to invest in their development. The mobilizer only makes the first choice. And the lone wolf makes neither”.
The study is full of practical ideas and evidence insight, for me 5 things stand out as challenges and opportunities for those working in ‘traditional’ organisations or associations looking to build grassroots networks;

This post first appeared on the Mobilizing Ideas February Essay Dialogues, and can be read in full here.