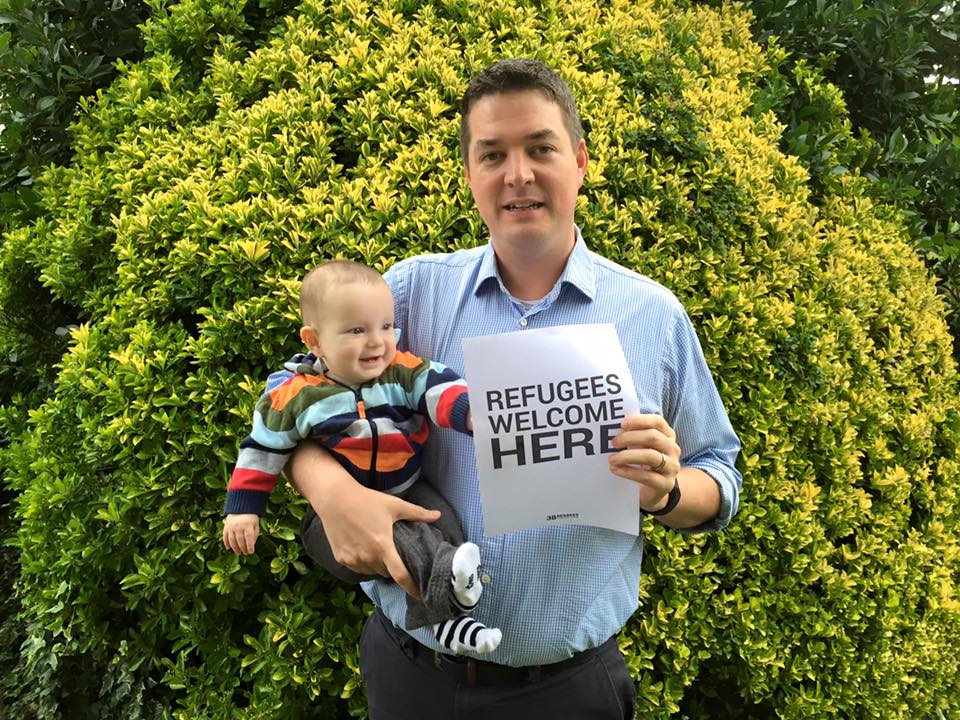 From winning a historic commitment to enshrine 0.7% on overseas aid into law, to being part of a global movement that mobilised 31 million people, to seeing friends celebrate success at the climate negotiations in Paris. 2015 has been a busy but brilliant year for me and my team at Bond.
Personally it’s also been a year of change, I became a father for the first time (proud father picture above), stepped back from being involved in the Labour Party at a time membership in the party surged (if you’ve just joined read my advice here) and tried to blog at least once a fortnight!
As we head toward the Christmas and the end of 2015, I’ve been reflecting on the lessons that I’ve learnt from the work I’ve done over the last 12 months.
1 – Winning is great – Development campaigning can sometime feel like change is secured by the inclusion of a paragraph here or a commitment announced there – all important but  . So being part of the winning Turn Up Save Lives campaign was an awesome feeling and a moment to celebrate. Fast forward 9 months and I had the opposite feeling when despite mobilising hundreds of local residents to welcome refugees to Wandsworth the council rejected the plan. The ecstasy of winning and the agony of losing are the best fuel for campaigning.
2 – We need to say thank you – to our supporters, to our activists and to politicians when they deliver what we’ve called on them to do. To those you work alongside in your movement.
3 – It’s vital to get outside the bubble – One of the most enjoyable things I’ve done this year is take 5 days to drive a VW Camper Van around the country talking to people in city centers about the Global Goals. It was a good reminder that our issues aren’t front and center of  people’s minds. Its something that I’ve experienced on the doorstep as well – most of the public aren’t interested in our issues. We all need to get out and about talking to Joe Public on the High Streets and Cul-de-Sacs of the UK
4 – Be movement generous – When I started the year explaining to people that the action/2015 campaign would be based on a ‘flotilla’ approach many weren’t convinced. The idea was we would agree on broad objectives and coordinate loosely around tactics but allow organisations to keep their own brand and not create a strong coordination structure. But the approach has worked remarkably well. The formal evaluation will capture all of the secrets of its success, but for me one of the key elements has been the commitment to movement generosity among those involved. It’s not always easy, but one of my keys to successful coalitions.
5 – Persistence pays off – Turn Up Save Lives was a campaign that had its roots in mass lobbies of Parliament in the 1980. The decision by Obama to reject the Keystone XL pipeline was a victory for a 5+ year campaign. It’s easy to get caught in 12 month planning cycles for our campaigns, but both are reminders that change can often take a lot longer.
6 – Elections change everything – Sure, perhaps none of us saw the result we got but the outcome of the UK General Election has changed the political dynamics dramatically (my initial thoughts here).  I’ve spent my whole campaigning career under a Labour or Coalition government, and there aren’t many people around who ran campaigns under the Major government in 1996. Adjusting to the new political landscape is critical, for example the one individual I wished I’d spent more time campaigning towards over the last 5 years – George Osborne. The Comprehensive Spending Review in November showed he’s the one making many of the key political decisions in the current government.
7 – Spending time learning from disruptors – some of the most successful campaigns this year haven’t had a single NGO involved in them. Remember the milk price protests across the summer, or seen how Uber have pushed to get TfL to change the regulations of taxis in London. Both successful examples of using campaigning tactics to deliver change – and that’s before you look at the wins that change.org has delivered.
8 – Time to think about new approaches – the calendar has been packed with ‘moments’ this year – from UN Summit, to Election, to Climate Negotiations but is it time to move away from ‘moment’ focused campaign that we’ve grown comfortable with.  The same goes for our tactics. I’ve spent lots of time reflecting on if we need to move away from petitions and do more to invest in our grassroots networks of activists. More to think about in 2016.
9 – Take M&E seriously – M&E isn’t often described as motivating and exciting, but as this excellent report from my colleagues at Bond suggests we need to be putting them into the public domain where they could more easily be used to improve the international development programmes of the future. It’s time as campaigners to do the same, to take M&E seriously (here are some thoughts on how to do that) and start sharing our evaluations.
10 – Take a break – I’ve been terrible at taking my own advice from the start of year. Time to start thinking about 2016 resolutions!
Finally, on a personal note, it’s been a record breaking year on the blog. Thank you to everyone who has commented, tweeted posts, signed up for email updates or just take the time to say they enjoy the blog. They’re all hugely motivating to keep going. I’m looking forward to 2016 where I’ll aim to continue to bring you regular posts on what’s happening in the world of campaigning.

Every year I collate a list of some of my favourite readings from the year. So settle in with a glass of mulled wine and enjoy…
Is Too Much Funding Going to Social Entrepreneurs—And Too Little to Social Movements? – This article totally hits the nail on the head about why we need to invest in advocacy, despite all the challenges.
Are Uber and Facebook Turning Users into Lobbyists? – Is the the new face of campaigning? More here.
How We Won Marriage: 10 Lessons Learned – A great playbook from one of the big campaign wins in 2015 in the US.
Why Nonprofit Leadership is so Darn Hard – because it is!
Taking a Cinderella issue to the ball: 11 lessons from a long campaign – I’m a huge fan of the work that Shelter have done to get housing up the political agenda. This is a great summary.
What are the implications of ‘doing development differently’ for NGO Campaigns and Advocacy? – Duncan Green at his challenging best.
2015 really was the first digital general election: here are 7 lessons you should know – remember the election – lots of good learning about what the Conservatives did to win, see also Paul Abbott at ConHome and Jon Quinn.
Slacktivism is having a powerful real-world impact, new research shows – time to revisit the assumptions about the impact of slacktivism  – plus more here on why people protest.
Advocacy and Lobbying: What Can We Learn from the Bad Guys – we spend lots of time learning from our friends but what about those we target (clue – they often focus on obscure processes)
How the Mad Men lost the plot – Ian Leslie on how advertising is changing, but lots of application to campaigning and how we get our messages across.
Inside the war on coal – This week many have celebrated the successful conclusion of the climate negotiations in Paris, but the story of how groups like the Sierra Club have built momentum in the US is part of the untold story of how that deal could be reached.
Mobilising vs organising – This is a great summary of a cracking book. Looking forward to welcoming Hahrie Han to the UK next year.
Inside Invisible Children’s massive grassroots network – I could have selected dozens of articles from Mobilisation Lab but this is fascinating. If you’ve not already you need to sign up for there regular Dispatch mailing.
Charities shouldn’t campaign? History suggests otherwise… – 2015 has been a tough year when it comes to the space to campaign this reminds us our work is critical
Upwell – sad to see the end of this project to get people talking and advocating about oceans, but he blog lives on packed full of insight about how to get your issue into conversation on social media.
What have you read this year that you’ve enjoyed? Please use the comments below to post your favourite campaign reads from 2015.