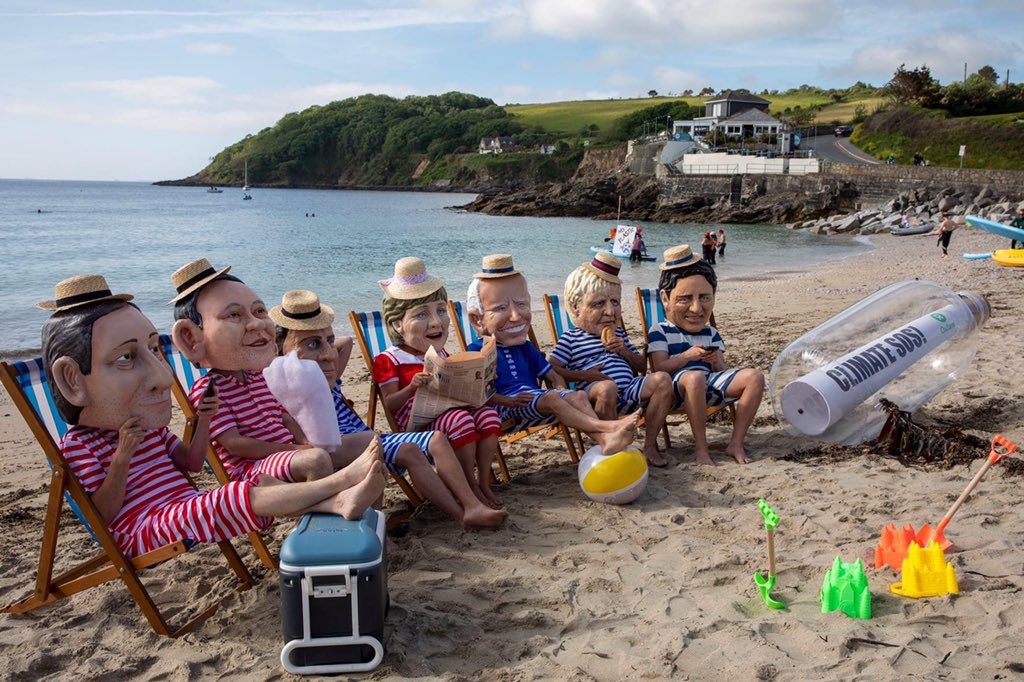 Earlier this month, working with the Crack the Crises coalition, I was in Cornwall for the G7.

Around Falmouth, where the G7 media center was located, at times it felt like you were at a festival of activism, with dozens of causes and campaigns looking to get coverage for their issues, and given the COVID restrictions more so than at previous G7 lots of these were through photo stunts (see a good collection here).

Across the weekend of the summit, as the Crack the Crises coalition, we organised for a blimp of Boris and Joe Biden to float in the Harbour, and for members of the coalition and the local community to hold a Vigil to remember the 3.7 million people globally who had lost their lives due to COVID.

So it got me thinking about the role of and use of stunts as a campaign approach.

Over the weekend of the summit I saw how what I’m calling the ‘summit stunt cycle’ can work itself ou. Given you can’t actually advocate directly to decision-makers at the G7, so much of the influencing that happens during a summit like the G7 through the media – those running the summit, in this case, the UK government, want to use the media to portray the summit as a success – ‘look we’ve got leaders to donate 1 bn vaccines’, while those of us on the outside want to suggest otherwise – ‘a huge disappointment and a missed opportunity‘.

And that’s where stunts can be really helpful.

They provide an opportunity to get the media interested in your message or perspective, by providing a hook for a photo or a conversation with a journalist, which can lead media interviews, which can lead to help set expectations for what ‘success’ from the summit would look like, causing your target to respond – hopefully by raising ambition – and so you get to go round the cycle again.

Perhaps the G7 is a unique summit, but the reality is that photo moments or stunts can be a useful tool for campaigners, so here are 5 top reflections on what makes a successful summit stunt;

Since 2005, they’ve been taking their Big Heads of G7 leaders to summit after summit and serving up brilliant photo after brilliant photo. So this G7 the focus was going to be focused on vaccines and climate – so that’s what the Oxfam stunts were about. Perfectly providing a picture – and an alternative message – to what the government wanted the message to be.

2. A good stunt is simple – the adage that a ‘picture paints a thousand words’ is so true when it comes to stunts. It can be really easy to over think or overcomplicated – something that sounds great in a brainstorm but doesn’t translate into a stunt. And the reality is that if you build on the ‘summit stunt cycle’ you don’t want to overthink it.

How much did a giant blimp of Boris and Biden actually have to do with vaccines or climate? Not that much, but perhaps it didn’t matter – it said ‘these are the leaders that matter and we need them to do more than just turn up for it to be a successful meeting’

3. Plan to fill the quieter moments – There are hours of coverage at a summit that need to be filled by journalist and broadcasts, perhaps even more so in the days of live blogs and 24-hour news – and only so many photos of leaders on a beach, at a BBQ or around a table.

Don’t plan to do your stunt when it’ll be clashing with leaders press conferences, but do think about early in the morning, or in the evening, when the official agenda is quieter.

We got the media out on a press boat at 8am and got lots of coverage for the blimp just because nothing else was happening at the Summit. The Vigil we held was at the end of the day and ran on many news channels over the whole night, as it was one of the last images from the summit that day.

4. Be adaptable – this is why I’m so in awe of the Big Heads because they can easily be reused to work for the moment. The dynamics of the summit can change across a weekend, so planning a stunt for the final day which can’t be easily adapted is risking the summit staying on track – having something more adaptable means as the summit goes on your can help to adjust your approach to feed into that summit stunt cycle.

But you also need to accept that not every stunt will get coverage– but as with much campaigning, it’s better to try and not succeed than not try and wish you had.

5. Work together – Good stunts work because they bring everyone together, you need media colleagues to get out and sell it in to the media, you need spokespeople who are preapred to do endless interviews to share the message, you need social media colleagues to push the idea out on your own channels, and you want to work with event experts to make – it’s a perfect example of when campaigners need to be the glue to hold it all.

One thought on “How stunts can amplify your campaign message”