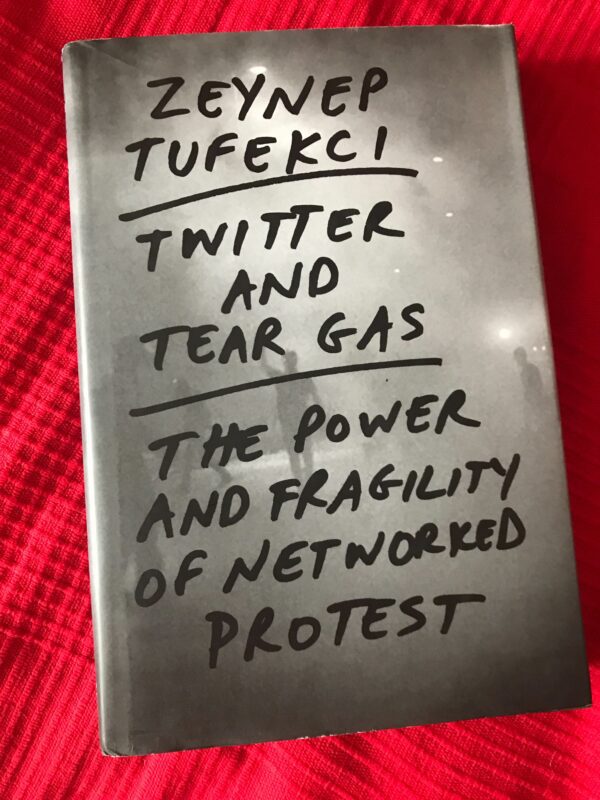 If I had a pound for every time someone had said to me “we just need to put something on Twitter” as a response to a campaign problem, I could probably retire.
I don’t believe that somehow armchair activism can win change along – I believe to do that we need to build power in person.
But at the same time, its hard to ignore the role that Twitter has played in helping movements like #MeToo and #BlackLivesMatter to emerge, and it’s certainly the case that social media has transformed the media landscape and how ‘news’ is shared.
I’m torn about the role of social media in winning real change, and that’s before we get to questions about the oversized power that Facebook, Twitter, etc has one shaping the information we consume – a theme explored in Jamie Bartlett’s excellent The People vs Tech.
So found that I really enjoyed Zeynep Tufekci ‘Twitter and Tear Gas – The Power and Fragility of Networked Protest’. In fact, I’d go as far as saying its one of the books I’ve enjoyed reading the most in the last few months.
The book is a fascinating, authoritative and accessible academic read on how social media has changed the nature of protest, and the implications of that, both good and bad.
Unlike so many books and articles on the role of social media in campaigning, it manages to avoid just trying to reinforce the ‘slacktivism’ argument or suggesting that keyboard warriors will. It’s a critical look at how social media is changing the nature of protest for the good, but also some of the unexpected consequences – this is a good TED talk of some of the key themes.
As part of it, Zeynep argues that we need to watch out for some pitfalls that can emerge from movements and campaigns that form online but then transition into popular protest;
1 – Agility – social media can be led to movements forming around a specific ask or tactic at real speed, but that can also be their downfall as they can produce ‘tactical freezes’ which make it hard for movements to easily adjust tactics or approaches in light of changing external circumstances.
2 – Resilience – many movements that have succeeded have needed to come together over extended periods of time to collectively negotiate approaches and work together, through that, they have built ‘network internalities’ the ties that help a movement to keep going when they’re not trending on Twitter.
3 – Longevity – as part of her approach Zeynap reflects on the lessons from the civil rights movement in the US – reminding us that the bus boycott in Montgomery started by Rosa Parks, lasted for almost a year, sustained by those movement organisations which we’re able to provide practical, legal, logistical and emotional support throughout the period. When a protest is happening, the role of these groups can be key to sustain it.
4 – Infrastructure – something built from the work of a group or movement coming together to deliver a shared goal or activity. The March on Washington required a team to work together to plan every aspect of the day, from lunch boxes to sound systems – I’d recommend The March on Washington: Jobs, Freedom, and the Forgotten History of Civil Rights by William P Jones for more of a look at the details that went into making the march happen.
It was, in part, that level of detail that ensured the day was known for MLKs ‘I Have a Dream’ speech rather than anything else. While social media can help to overcome some of those challenges through collaboration platforms, movements need to have organisers at the heart who are actively thinking about this, and are able to signal that to those in power that this can’t be a movement to ignore.
5 – Negotiation – while the lack of identifiable leaders can be a real strength, allowing a movement to stay on being about an idea, not a personality. When it comes to a need to negotiate a compromise with those in power this becomes harder, as it’s not possible to identify who the ‘leaders’ are. In some situations, negotiation isn’t an option, but in others, the energy of a protest disputes before any gains can be made due to the lack of its ability to collectively negotiate.
As campaigners, I found the themes really resonate at helping to explain both the tremendous opportunity that social media brings, but some of the shortcomings we need to be aware of.
It’s also reminder that change can’t be achieved by just trying capture the next ‘viral’ moment but instead requires investment in the slow and long work of building power, and a challenge to more formal/traditional actors in a movement to consider the role they can be playing in helping to build the infrastructure needed for movements to thrive.