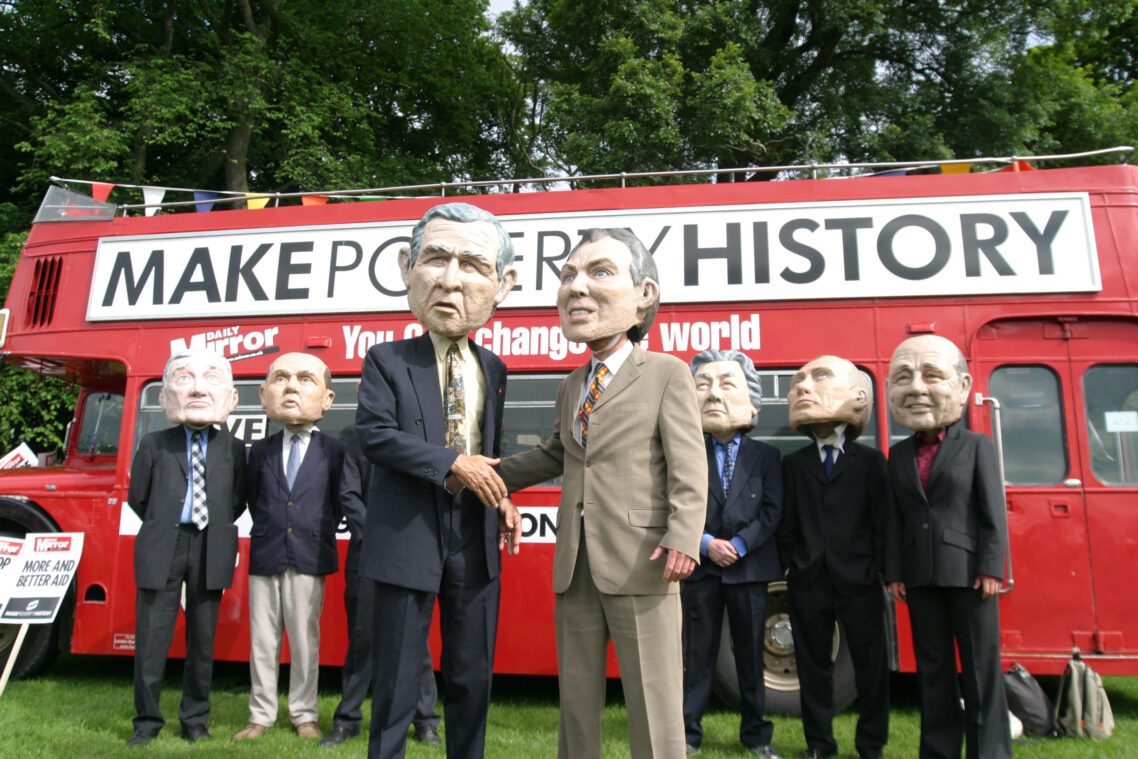 2005 was a good year, I got engaged, England finally beat the Aussies to win the Ashes, and I got to work on the Make Poverty History campaign.
Make Poverty History was the first big campaign that I’d be paid to work on. It was a huge movement that mobilised 100,000s of people to take action on debt, aid and trade as the UK government hosted both the G7 and the EU Presidency.
This week, its a decade since the biggest moment of the campaign, a huge 250,000 person march in the centre of Edinburgh, accompanied by the Live 8 concerts on the eve of G7 leaders meeting in Scotland.
10 years later, and it’s still the campaign that I mention when I try to explain what I do to my second aunt.
While lots has been written about the impact of the campaign, being the first campaign that I was really involved in organising I’ve been reflecting on the campaigning lessons that Make Poverty History taught me. There are lessons that still apply today;
1. Unusual coalitions deliver change – at the time, I remember a friend who worked in a totally unrelated job at Number 10 talking about how the unexpected partnerships around the table the campaign was creating waves internally. Bringing together 500+ organisations meant that the campaign couldn’t be dismissed as just ‘the usual suspects’.
2. Be prepared for the second act – I’ve written about this before, but the campaign ran for the whole of 2005, concluding in a Mass Lobby of Parliament in the rain on trade justice in November, but because the majority of the resources had been deployed to ensure the push towards the G7 moment was as successful as it needed to be, the campaign didn’t have the resources for the ‘second act’ causing a loss in momentum over the summer, and the impression by some that the campaign had come to an end.
3. Sometimes you need to let it go – I remember that it quickly became apparent that the campaign had captured the public imagination, individuals were calling up with , events being organised across the country, churches want to wrap their spire in WhiteBands (the symbol of the campaign) and much more.
Now we’ve become very used to the idea of more decentralised ‘bottom up’ campaigning, an approach pursued by groups like 38 Degrees, but at the time it was uncomfortable for organisations who’d been used to a more ‘command and control’ approach to managing their campaigns. If our campaigns are to come to life we have to be prepared to let the brand run a little wider than we’d immediately feel comfortable.
4. A good campaign has a halo effect on its targets – most of the MPs who were lobbied as part of the campaign probably can’t remember the details of the policy asks from the time, but the impact of the campaign have lasted well beyond 2005. Long after the campaign has come to an end politicians who were lobbied still mention Make Poverty History. As we get further away from 2005, that effect is definitely declining, but even today I think we’re getting wins on international development issues as a result of the campaign.
5. A campaign can benefit from a ‘radical flank’ – the tensions within the campaign, between organisations who had different political and policy analysis have been written about elsewhere, but the campaign was a excellent examples of the concept of the ‘radical flank’ when the positive or negative effects that radical activists for a cause have on more moderate activists for the same cause. Did those groups who took more ‘radical’ position help mean that the asks of the campaign were seen as more ‘moderate’ by the government and thus achieved?
6. The transaction costs of building coalitions are high – Make Poverty History was over a year in the making before it was launched in early 2005, it took many hours of meetings and discussions to reach agreement, a reminder that the start-up costs of forming coalitions are often significant. This work was helped by a tradition of working together that had come from previous campaigns on debt and trade by many of the key organisations, the need to keep this type of infrastructure in place is vital to build trust and bring individuals and organisations together.
7. Building public support is really hard – Make Poverty History had a brand recognition of 90%, but despite all the high profile media, celebrity involvement and grassroots chatter, the evidence suggests that it didn’t lead to a significant increase in the number of people ‘very concerned’ about global poverty issues. It’s a reminder that building public support requires sustained attention (and perhaps using the right frames).
8. Don’t be afraid to try something new – The campaign adopted this approach ‘“don’t be afraid to be the first to ‘crack’ a new platform, give trendy a try, and take a risk!”. In many ways Make Poverty History was the first internet campaign, albeit one with a campaign video where you had to select the speed of your dial up connection, comfortable trying out new approaches as we sought to understand the power of the web for campaigning.
Looking back, I’m incredibly proud of the small role I played in the Make Poverty History campaign, it wasn’t a perfect campaign (here is a secret – no campaign is) but one that taught me so much but more importantly delivered real results.
I’ll take the memories of Vicars walking to Downing Street, Nelson Mandela in Trafalgar Square, getting sunburnt in Edinburgh, staying up all night on Whitehall, and getting very wet outside Parliament wherever I go in my campaigning career. It was a very special year.