Last week I spent a fantastic three days with campaigners from across Europe in Brussels calling on the MEPs and representatives of Member States to help to unearth the truth. We were calling on them to pass legislation that would require all oil, gas and mining companies registered in Europe to be open about the payments they pay for access to these valuable resources to governments.


It was the culmination of months of campaigning across Europe and we had a hugely productive time together, meeting with dozens of MEPs, handing over 10,000 actions to representatives of the Danish Government who currently hold the Presidency of the EU and holding a well-attended briefing in the Parliament.
I came back with lots of great memories and some reflections on campaigning towards the Brussels based institutions;
1 – Time – I was struck how much time many of the MEPs gave to the campaigners they were being lobbied by. Meetings of up to an hour happened on a number of occasions and it struck me that the pace of the debate is perhaps slower and more deliberative, coupled with the fact that MEPs are perhaps not as bombarded casework requests that they have time to invest into the issues that they’re interested in, which is predominately shown through their involvement in the different committees and groups.
I also got the impressions that although the political groupings were important they were far less controlling than in the Westminster system where the ‘whip’ is used to ensure MPs vote the right way and as such a space for discussion and agreements amongst those MEPs with similar political views as opposed to rigid voting blocs.
2 – Complexity – The European institutions are very confusing and eyes will often quickly glaze over when you start to explain the difference between the Council of Ministers and the Commission, but its worth investing the time in understanding how they’re meant to work and also the dynamics of how they actually work. I found reading this guide from BOND hugely useful. There are a huge number of opportunities for campaigners to utilise to push their issues.
3 – Importance – In the UK perhaps we’re guilty of disregard MEPs as having limited influence in comparison to MPs but the reality is that they have a significant amount of influence on certain issues. For example, if our campaigning is successful the legislation that we’re asking for will be implemented in all member states, achieving the same using a country by country would take much longer. On issues where the European Union has exclusive or shared competency we shouldn’t overlook the importance of engaging with Europe. 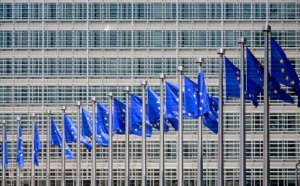 4- Absence – Many of the MEPs that we meet with remarked how much they valued hearing the views of civil society on this issue we were campaigning on as they’d already been lobbied by business groups. I heard one estimate that Brussels is home to 15,000 – 30,000 lobbyists, most of whom are employed by corporate interests, and that clearly presents a challenge for civil society which is likely to be unable to match that level of personal resource!
However, I didn’t get the sense that most MEPs have come under similar campaigning influence to their counterparts based in national capitals, as I walked around I saw lots of posters publishing the European Citizens Initiative (see my post on it here), which I sense is one way that the Commission hopes to engage citizen and civil society, but I also wonder if as organisation we need to be doing more. Perhaps it’s also time to create a pan-European equivalent of 38 Degrees focusing on activities in Brussels?
5 – Being European – Our campaigning was successful because we were able to build a partnership with colleagues from across Europe at the outset of our campaign, it meant that our supporters were lobbying in Brussels alongside campaigners from Portugal, Germany, France and the Netherlands, plus we were able to handover campaign actions from 22 member states. As UK campaigners I think we need to be doing more to help create these partnerships where they don’t exist.
6 – Using constituents to drive attendance. We were involved in hosting a very successful briefing event in the Parliament on Wednesday, with one civil society representative saying that the 15+ MEPs in attendance was unusual. I think this happened in part by asking our supporters to message their MEPs and invite them to come along to the meeting. It’s a tactic that I’ve seen used before in the UK and one that worked well in Brussels as well.
Have you been involved in campaigning in Brussels? If so, what insight would you share? If you haven’t, what are the barriers that stop you?
By subscribing you're agreeing to get occassional updates from me. I use TinyLetter to power this and you can unsubscribe at any time. I won't use your email for anything else.