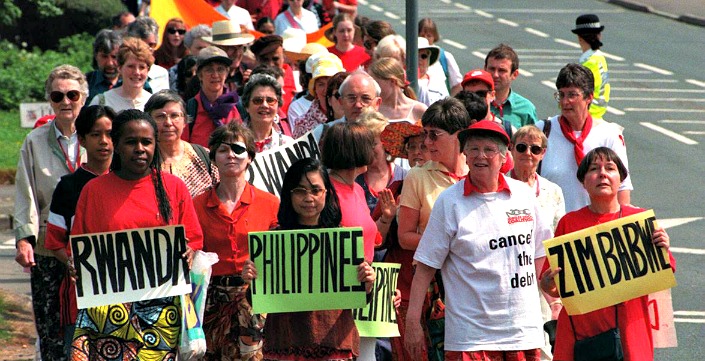 For the last few weeks, I’ve been spending some of my time as a debt campaigner.

It’s been important work on a professional level, working with colleagues from across Save the Children and many beyond to push the World Bank and IMF to provide debt relief to the world’s poorest countries so they can spend it on their COVID-19 response (more on why and what needed to happen here).

On a personal level, it’s been enjoyable as it’s been a very short journey down memory lane, because the Jubilee 2000 campaign was the first campaign that I  was involved in.

But also because I know that so much of the campaign that I’ve been able to be involved in since have been able to build on the rich legacy of the Jubilee movement – without Jubilee 2000, you wouldn’t have had Make Poverty History in 2005, without that you’d not have had a campaign for 0.7% to be enshrined in law, and so on…..it’s the starting point for so much of the campaigning on international development that’s happened across the last 20+ years.

Jubilee 2000 was a hugely successful campaign, seeing the world’s richest countries agreed to the cancellation of more than $100billion of debt owed by 35 of the poorest countries.

(As an aside, if anyone ever asks me if campaigning works I’ll take them to this school that I saw built in a rural community in Ghana that was built thanks to the money released through the campaign).

However, because the campaign happened 20 years ago, just before the age of everything being captured on YouTube, or perhaps because many of the leaders of the campaign have moved into other roles the campaign isn’t often discussed.

It should be, so here are my five quick lessons on what campaigners can still learn today from the original Jubilee 2000 campaign;

1. The best campaigns are powered by a simple idea – back in the 90s, Martin Dent, a retired lecturer in politics at the University of Keele, had the idea behind what would become the campaign. To use the biblical principle of Jubilee (the canceling of debts every 50 years) and call for the cancellation of third world debt by the year 2000.

A lot of strategies were built off that idea in the subsequent years as the policy work around the campaign was developed, but that simple, core idea was never lost. It was always going to be possible to say if the campaign had succeeded or not. It captured perfect what Purpose articulate in their theory of change for impact, with a clear target, goal, and impact.

2. Never underestimate the power of unusual alliances – throughout the campaign, you had unlikely or unexpected alliances coming together. Religious leaders, including the Pope, joining with Bono, Muhammad Ali, Youssou N’dour, economists, trade union leaders, healthcare workers, and many others coming together.

It was possible to put the campaign in a box, and that mattered as it made for unusual and unexpected partnerships, as this paper recalls the role that Bono played in convincing conservative US politicians. That unusual coalition, although I suspect at time fractious to hold together, was critical for the success of the campaign.

3. Don’t overlook the role of faith communities in helping to secure change – As a Christian, I’m biased in this, but it feels that the hundreds of thousands of members of churches and faith communities who came together to demonstrate to political leaders that they wanted to see action taken, for example, the 50,000+ who joined the human chain in Birmingham when the G7 met in 1998, was integral to the success of the campaign.

Drawing on communities of faith (and their traditions – in this case, the idea of a jubilee) can bring something powerful into any movement.

4. To achieve your change you (often) need allies in power – evaluators are undoubtedly divided on how much it was public campaigning that drove the decision to cancel the debt versus the political factors that led to it – and indeed that will always true in evaluating impact.

But as my boss Kirsty is always quick to remind me, campaigners can create the conditions for change, but it’s politicians who act to ensure that happens.

Undoubtedly the debt campaign needed the, then UK Chancellor of the Exchequer, Gordon Brown, to act as an advocate for it inside the G7 – he famously received a campaign action from his mother with a note to not “waste your money on a stamp to reply”, and as this film explores also the important role of leaders of some of those countries who were set to benefit from the relief package in pushing for action as well.

5. Petitions can play a key role in your campaign – a staggering 24 million people across the world signed the Jubilee 2000 petition for debt cancellation – it was at the time a record-breaker and remains so. Something that is even more remarkable when you consider that it was gathered together in the days before digital campaigning.

The petition was used as a calling card for the movement, that behind it was support from so many, a reminder that a petition – if effectively used can help to demonstrate support for the change you’re calling for.

If you’re looking for more comprehensive document looking at learnings from the campaign – I’d strongly recommend reading Cutting The Diamond by Ann Pettifor who was one of the key leaders of the campaign.

Updated on 21st April to reflect helpful comment that it wasn’t economists that came up with the idea, but Martin Dent, a retired lecturer in politics at the University of Keele.

One thought on “Jubilee 2000 – five enduring lessons for campaigners”