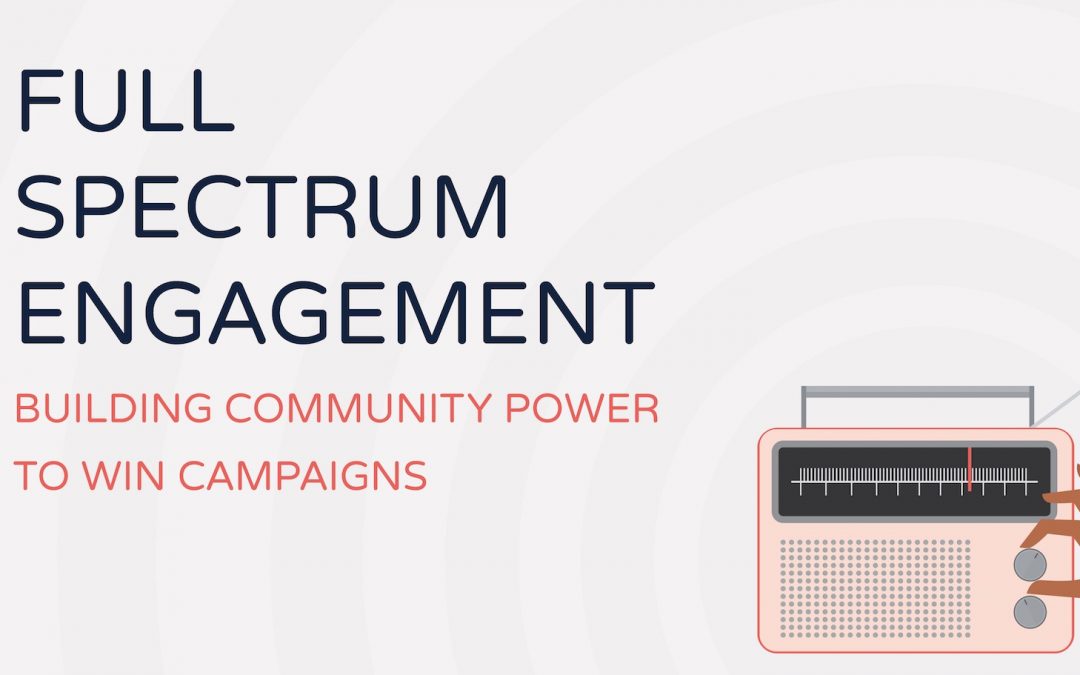 If I’m honest, I’ve been distracted by the World Cup over the last few weeks, but one paper that I really enjoyed reading while I was away on holiday, was Full Spectrum Engagement – Build Community Power to Win Campaigns.
A short paper pulled together by the team behind NetChange, New/Mode and others looking to bring together effective community building practices and new engagement tools,
It draws together threads from some of the most interesting thinking on campaigning that I’ve read over the last few years – reflecting on the work of Hahrie Han, the principles of Networked Change, the insight on New Power, the idea of Big Organising and the Engagement Organising. It’s also built on the back of a stack of research about how those we target are engaging with campaigning.
It’s based on 5 key principles;

It’s a quick report to read that prompted me to reflect on a few lessons that I can apply in my campaigning work.
1 – Petitions still have a role in our toolkit – it’s become fashionable in some parts to be dismissive of petitions as a tactic to secure change, it’s a view that I know that I sometimes find myself endorsing. But Full Spectrum Engagement challenges those who might hold that perspective to consider the role they can play in helping to engage people. However, we need to be honest that many of those who campaign for us are increasingly wondering if anything will change from the actions that they take – the report cites some interesting research from Google about involvement in civic engagement.
2 – Don’t overlook the ‘mushy middle’ – one of the principles that I found most exciting about the approach is the role that it sees for the ‘mushy middle’. These those campaign steps that fall somewhere between online engagement but aren’t the high bar. How do we use a letter to editors or phone call to decision-makers to help make the step up the pyramid of engagement? They have a strong tradition in campaigning in North America but it feels like in the UK we’re more reluctant to embrace them – but they can be powerful tools in helping to deepen the engagement of campaigners.
3 – Enter anywhere – We spend lots of time thinking about engagement as a ladder or pyramid that you can go up (and down) but that approach limits our assumptions about where supporters will start – and while most will move up – the experience of the Bernie Sanders campaign shows that some people want to jump in higher up, and take on more responsibility, while at other times you’ll need to present compelling ask to get everyone to go deep. Think more about a matrix of engagement.
4 – Have a really clear theory of change – the report cites the examples of campaigns, like Stop Adani, that have really worked to produce sharp and easy to communicate theories of change – suggesting that they help those who support your campaign understand how we’ll collectively achieve change. I’ve often thought about a theory of change as something that’s internally focused, but have found this approach from Purpose really useful to shape my thinking about the role of creating a shared public understanding of what you’re looking to achieve.
Can you campaign complete the following sentence to explain your campaign – ‘If we mobilize (participant) to (actions), we can influence (target) to achieve (goal) in order to (impact)’
5 – Make supporters the stars – reiterating a theme that comes up across many of the works that inform the paper, it’s no longer an option not to involve supporters at the heart of your campaigning, that this needs to increasingly be about giving away control to them, finding ways to get them to involve, shape, inform, and lead. Campaigns that aren’t able to do this are likely not to succeed – and it requires us to build meaningful relationships.
6 – Seek out new metrics? – It feels like lots of reports circle back on this as a theme, recognising that so many of the metrics that we feel most comfortable to use focus on our reach rather than our impact. Building on research by the Open Gov Foundation, I know that i’m going away from reading the report thinking more about how I can develop metrics that speak to the strength of the relationships they have with decision makers – looking to think less about how much reach we can have on a really good day, and more on the depth of the our relationships week in, week out.