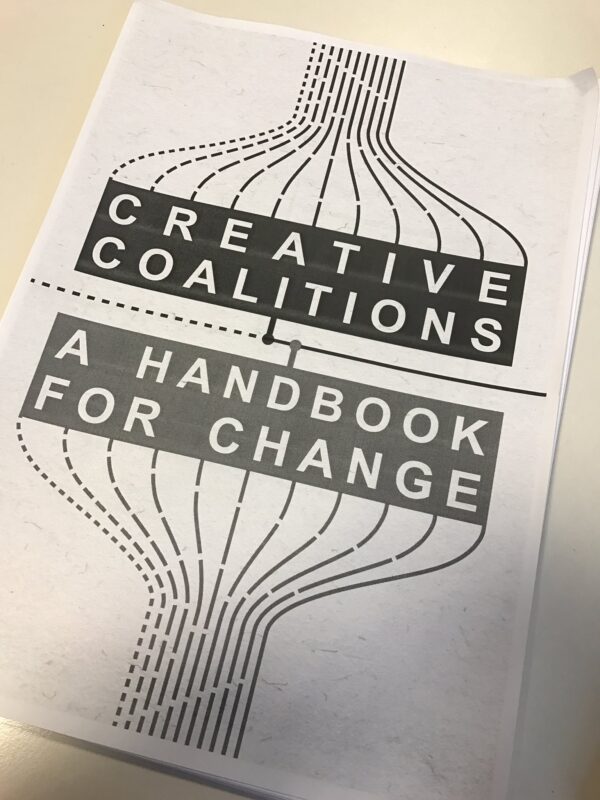 When it comes to building brilliant coalitions that achieve change, the team at Crisis Action are some of the best in campaigning sector at doing just that. And to benefit all of us, they’ve shared the approach and model they use in Creative Coalitions – A Handbook for Change.
I’m passionate about the importance of coalition campaigning, and it’s something I’ve written about before on the blog, but listening to Nick Martlew, author of the guide and UK Director of Crisis Action speak when he came to the Save the Children office a few weeks ago, I was struck that there are some characteristics and approaches that epitomise highly effective coalition builders that we can all learn from.
1. Strive for excellence – coalitions can often fall into a ‘lowest common denominator’ approach, where you start out by considering what are the asks that everyone can agree on, rather than what is needed to deliver change. For Crisis Action that’s the wrong approach, they start by asking what’s the outcome they are looking to achieve and then ask who they need to involve to make that happen. Work to build together a critical mass of individuals or organisations who have a shared view of how a change will happen.
2. Thrive on feedback – you can only improve if you are actively asking others if what you’re doing is or isn’t working. See feedback as a ‘gift’ and actively seek it out from those you’re working with. It might not always be comfortable received but it invaluable about making you more effective. Be generous is sharing it with others.
3. Keep ‘other’ people in the game – if you’re building a coalition that isn’t going to involve everyone that doesn’t mean you have to ignore them or cut them out. Keep others informed of what’s happening, draw on the insight and knowledge they have – you never know when their insight or connections might come in useful later down the line. Share the insight you have.
4. Always talent spot – keep asking does the tactic your delivering do enough to solve the problem. If it does bring together the best people that can help to deliver that. Crisis Action always asks who should be on the team – who are the talented individuals that they need to be seeking out to get involved.
5. Exceptional networkers – be active at building out networks beyond your usual suspects. Spend time asking them for their opinions – share your ideas for plans and tactics with them and get them to give you an honest assessment of it the tactic is likely to bring about the change you’re looking to achieve. Ask contacts in your networks for ideas of what they think is likely to make the difference.
6. Be Servant Leaders – deploy ego wisely, remember that the cause or the goal matters more  than an individuals profile. But that doesn’t mean being un-directed, Crisis Action encourages the principle of ‘democracy of ideas but a dictatorship of delivery’ ensuring leaders are effectively and rapidly bringing the best ideas to life, and delivery is kept on track.
7. Risk Takers – not in a cavalier or reckless way but they’re calculated gamblers who’ve asked around for evidence of what is likely to have the biggest impact, asking informed targets directly what would happen if they attempted specific approach, and then make the calculation about if it’s an opportunity that worth pursuing. That means it’s as important to learn from failure when things don’t work out as it is from success.
8. Seek efficiency – working in coalition often with high costs (I’ve written about what economics can teach us about working coalition). Great coalition builders seek to actively lower the transaction costs of getting involved. They look to find efficiencies that help to keep others involved.
9. Compulsive chroniclers – Write down everything that happens that suggests you’re having an impact – don’t just leave it to the evaluations. Crisis Action have an ‘evidence of change‘ database which helps to capture all the seemingly small changes that those involved in the coalition are seeing which often add up to the big impact.
For those that want to learn more about the report here is a useful summary, and Jim Coe (as always) has done a fascinating podcast with Nick.

One thought on “Building Coalition – learning from the best”