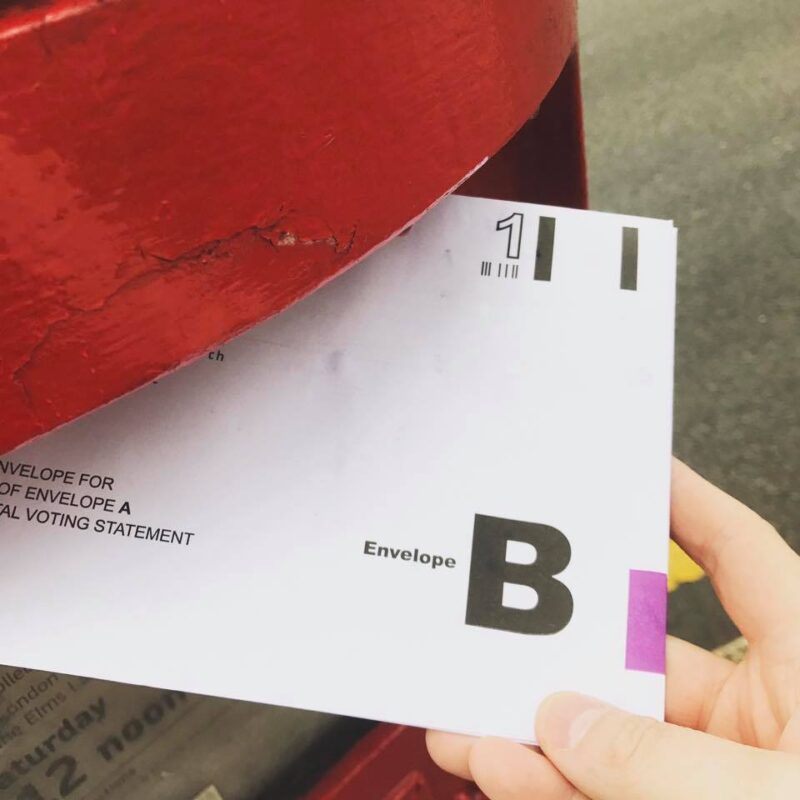 There are lots of article going around at the moment that suggests that campaigning charities should just walk off the pitch during the election campaign.
From weekly articles suggesting that the lobbying act is stopping charities speaking out – the latest here which suggest that some social care charities have felt they couldn’t speak out in the last few weeks. To an article published in Third Sector last week, where the director of NFP Synergy, Joe Saxton, argues that charities shouldn’t campaign during an election period suggesting that;
‘Charity campaigning during an election is like standing on a railway track in the face of a runaway train and shouting that you’d like to talk about their rail safety record. They’re not listening. They’re not interested. They’re politicians at the point when the annual cycle of politics is about to reach a climax. They might want to do a photo op with you and kiss any babies you have lying about, but don’t mistake that for cast-iron commitments to your policies’.
Now I don’t agree that at the calling of an election, charities should go into some type of self-enforced purdah, but rather than just rushing to say that I disagree, I wanted to reflect on why I think charities should get involved in speaking out around an election period (and on this it’s useful to read the response in the comments from NCVO with its helpful reminder that charities are encouraged to speak out during election periods – but they have to comply with the relevant charity and electoral law).
I think charities should campaign during elections for the following reasons;
1. This the moment when the direction for the next Parliament is set – part of the reason that the current election was called was so the Prime Minister could secure her own mandate on a manifesto that she’s put forward. That’s a good reminder of why organisations work to make sure that manifestos reflect the policy asks they’re pushing for. They know they’ll set the blueprint for what a government plans to do in the coming years.
While the work of getting into manifestos often takes months of work before they’re published, stepping back at the last minutes before parties finalise manifesto seems short sighted, especially if you can show a constituency of support, is a key opportunity. I know in my work on international development, elections have been a key period to get commitments from parties to meet the 0.7% target for overseas aid – something that has been invaluable for future campaigning.
2. They are a vital chance to build relationships – Not campaigning during an election and then turning up and asking to an audience after election day, is to me a little like deciding to support a football team once they’ve won the trophy.
Candidates are out and about day-in/day-out during election periods. They’re listening to what local voters are saying and this is where I disagree with Joe that politicians aren’t listening. I think it’s the opposite – most candidates are out and about in their constituencies far more than the rest of the year, and they’re critical periods for showing that you have a constituency of support for your issue or cause.
In the constituency I live in there’s is a particularly active campaign around school cuts, and I’m sure that will resonate with whomever gets elected. Not trying to demonstrate support for your issue during an election period and then turning up when someone gets promoted to a new job and demanding you should be on the top of the pile to meet with seems. Demonstrating power during an election period – as organisations like Citizens UK have done so well, can open doors post-election.
3. We need to be involved in democracies ‘big match’ – Campaigning charities rightly raise concerns that that the Lobbying Act is unfair because it appears to stop some voices speaking up at election time while allowing others to continue to do so. If we want charities to be seen as part of the rich diversity of voices involved in democracy here in the UK then vacating the pitch while the key match is being played seem short-sighted. Given the important work that so many do across the UK and beyond, the evidence from this that can shape policy and the breadth of the public who support our organisations with their donations, voice and time means we should be involved.
4. Elections are opportunities to engage people in your issues – as campaigner we often live in a political bubble, assuming the majority of people around us are thinking about politics all of the time. They’re not, as Jim Messina suggest the average person is thinking about politics for about 4 minutes a week, but I’d suggest election periods are a time when people more so than any other time are engaging with politics. They’re asking questions and searching.  I’ve certainly seen an uptick in activism from my supporters, and the evidence from post-election periods is that many organisation see a surge in people signing up.
Now, all this doesn’t mean that we should approach elections without any strategic thought. Too many campaigns don’t think enough about what their strategy is around an election time.
They focus on the wrong constituencies, don’t providing candidates with useful (or accessible) information, or not building the right groups or alliances of support to demonstrate why politicians should act on their issue. I wrote a few thoughts about how charities can do that well here and here.