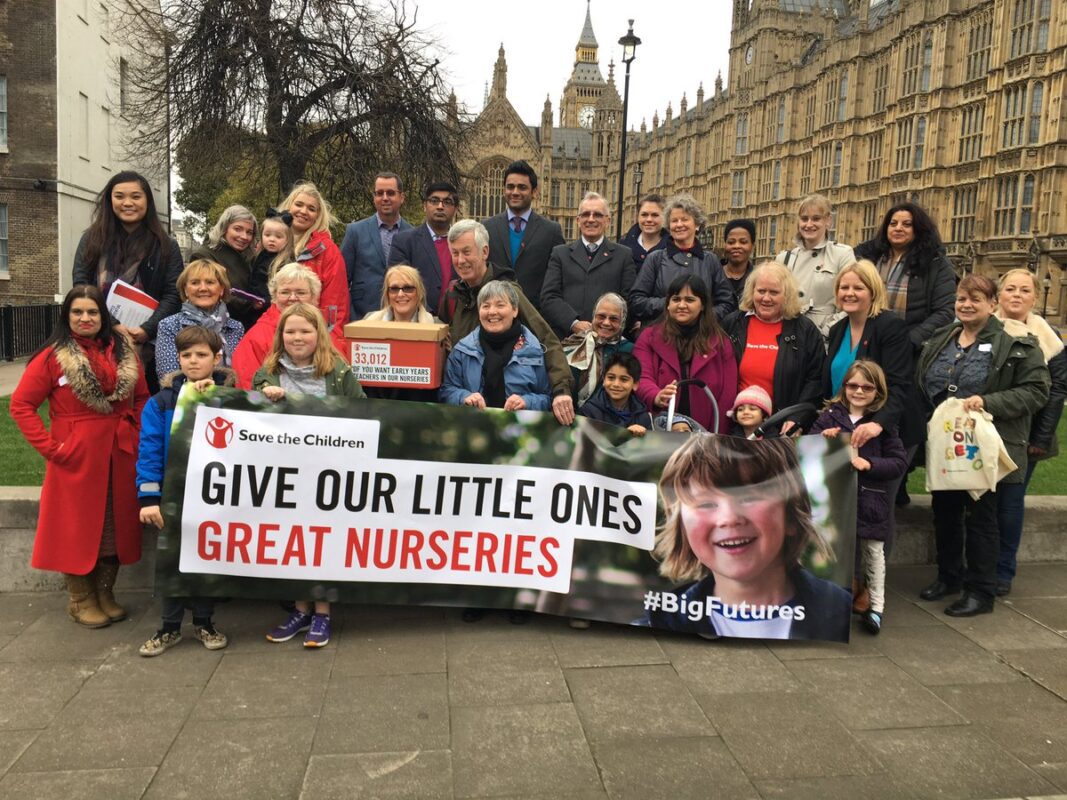 Some of my excellent team at Save the Children have spent the last 3 months organising a lobby of Parliament in support of our Big Futures early years campaign calling for more invest in nursery teachers.
Yesterday, we had an amazing day with over 60+ supporters coming along, meeting with there MPs and talking about the campaign ahead of the budget. It was a brilliant day.
As with so much of campaigner there isn’t really a written down guide to ‘how you go about organising a supporter lobby of Parliament’ so in an effort to readdress that, and also because my ‘How to organise a Downing Street petition handover’ has proven to be popular, here are a few lessons;
1. Set the date well in advance – lobbies of Parliament take lots of work to organise so if at all possible give yourselves at least 3 months to plan it. As you set the date do a quick to check to see if anyone has planned to do a lobby on the same day. Sometimes that can’t be avoided but if other big events are taking place it means it’s likely to be busy.
2. Get in touch with Serjeant of Arms Office – they’re responsible for what happens in and around the House of Commons, so it’s good for them to know what you’ve got planned,  but be careful of the language that you use when describing your event with them! I’d avoid describing it as a ‘mass lobby’ as that conjures up specific images of 1000s of people (if you’re going to have 1000s of supporters coming along I’d strongly recommend you get help.
3. Wednesday is a great day to do a lobby of Parliament – if you’ve got some flexibility in when you can hold your lobby, try to do it on a Wednesday as that the day most MPs are around. Aiming to catch MPs after Prime Ministers Questions is a good opportunity to arrange meetings.
4. Holding a briefing. Do it outside Parliament – There are lots of great spaces in and around Westminster that you can use, including the Mother’s Union, Abbey Centre and Westminster Central Hall. Using a space outside means that supporters who aren’t familiar with Parliament get an opportunity to meet with you and your team, and you can run through any last minute updates with supporters, and provide an base for the day if people have meetings with MPs at different times throughout the day.
5. You can’t follow up with your supporters enough  – Just because someone has said they are coming doesn’t mean that they are. We found that big phone banks where staff joined together to call through all the supporters who’d RSVPd was really effective way to do this. Keeping in touch with your supporters also helps them overcome point 6.
6. Arranging meetings with MPs can take persistence – Some MPs run really efficient and effective offices, but we’ve found that most supporters need to follow up with their MPs on a few occasions before they could secure a meeting, often by phoning them as well as sending emails. This includes having the facilities for supporters to phone MPs on the day.
7. It always takes ages to get through security – it’s a truth universally acknowledged that getting in via the main entrance always take time. So make sure you factor in time for that in any programme. Nothing is worse than missing a meeting because you’re in a queue. Also, if you’ve got supporters travelling some distance, remind them that they can’t take anything that wouldn’t get through airport security into Parliament.
8. Leave a ‘Green Card’ – If a supporter comes along without a meeting, and even after phoning on the day, they still can’t get a meeting, then it is possible to go to Central Lobby and ‘Green Card’ their MP. In former times, Parliamentary convention means that any MP who got a ‘Green Card’ would come and meet there constituent, but now it’s more of a ‘I called but you weren’t in’ way of getting a message across!
9. Have lots of staff around to help supporters – we found having staff located in strategic places within the Palace of Westminster was really helpful for looking out for supporters before/after meetings. Just because you’re used to heading into Parliament don’t assume that your supporters will be. It’s a imposing, inspiring, and bewildering building for many.
10. Make sure you provide talking points, and something to leave with MPs – You’ve briefed supporters in person, and on paper. Great. But you wouldn’t send your CEO into a lobby meeting without a set of talking points. So don’t do the same with your supporters. Also have something they can leave with the MP, ideally with local statistics which show the impact of your asks, and clear requests of what you want them to do next. It’s a good way of ensuring that your key asks don’t get forgotten.
11. Capture feedback on the day – You want to be in a position to learn how the meetings have gone. So produce a feedback form supporters can complete, and make it clear how you want supporters to pass it onto you. This is where point 9 comes into its own – but reiterating the role for feedback you know what MPs have committed to do.
12. You can’t say thank you enough afterwards – your supporters have just done something amazing for you and your organisation. So make sure you thank them. We offered everyone who came to our lobby a tour of Parliament at the end of the day and they’ll all be getting a hand written note as well.