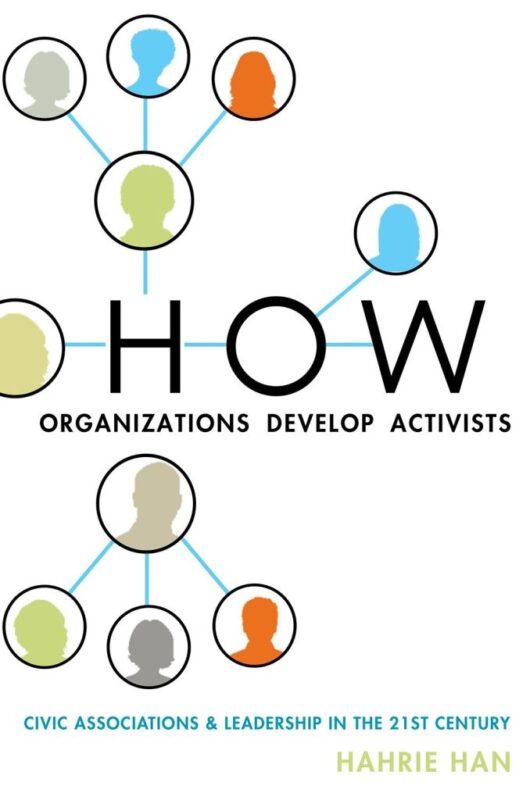 One of the best books that I read last year was ‘How Organizations Develop Activist‘. It’s very relevant to the work of campaigners (if you can get over the use of z rather than s!), so I’m really excited to say the books author, US academic and activist Hahrie Han will be heading over to join us in London in late March.
Working with colleagues at Action Aid, Friends of the Earth and Christian Aid we’ve been able to arrange for Hahrie to give a lecture at the University of Westminster at 5.30pm on Thursday 31st March, and an already sold-out day long skill share.
The lecture is open to anyone that’s interested in – and I’d strongly recommend it to any campaigner, community organiser or political strategist. Click here to register.
The lessons will be as relevant if you’re trying to get a Councillor elected in a by-election as if you’re trying to get governments to sign up to an international agreement on child survival.
But if you need more convincing here are some reasons why you should plan to join us, and a bit of background if you’ve not had the opportunity to hear from me in person about my enthusiasm for this work.
1. It’s based on real evidence of what works – Hahrie has turned her research lens on how charities approach organise their organising. The work in the book is based on a comparative study of two US organisations, one working on health and on the other environment. While their are differences between the UK and the US there are huge amounts of shared insight to take from it.
Central to the book is the ideas that groups can be categorised into Lone Wolves, Activists and Organisers. Lone Wolves are those who chose to ‘to build power by leveraging information — through legal briefs, public comments, and other forms of research advocacy’ while ‘mobilisers and organizers, by contrast, choose to build power through people’. This isn’t just an theory but based on lots of research from groups across the US.
2. It’s about taking learning from community organising and the Obama campaign approach as well – lots of campaigners are rightly excited about the insight that community organising approaches that groups like Citizens UK use, or the Organizing for America approach used in the Obama. But sometimes the application to the campaigning work of charities isn’t as easy to see. Hahrie’s work has looked at both of these approaches (indeed she’s written a whole book on the approach that Obama took in organising his campaigns) and helped to think about what it means for charities.
3. It’s bring new insight to an time honoured approach – For many the focus for charities over the last few years has been focusing on build the number of supporters who can take e-actions. That’s not a wrong approach, but it’s easy to see how building a network of activist can be deprioritised within that.
For Hahrie central to what works is understanding that there is a difference between activism and organising means and both are needed to deliver change. This from Joy Cushman sums it up well “The organizer thus makes two [strategic] choices: 1) to engage others, and 2) to invest in their development. The mobilizer only makes the first choice. And the lone wolf makes neither”. At the skillshare we’ll be able to dive deeper into understanding what this means for our work – something one of my co-organisers Natasha has written a cracking post on this here.
4. It’s about walking away with practical ideas that will help you build a better movement – When you read the book you have to do so with a pen in hand to capture the practical insights that come from the study, from the finding that the most successful groups were those that combined political and social activities, to the role of shared stories that get passed down within groups ‘do you remember the time when’ and much more. This isn’t research to file away, but practical lessons in how to develop activists.

Register for the lecture here.