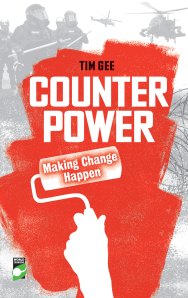 This book will make a bold claim: that a single idea helps to explain why social movements past and present have succeeded, partially succeeded, or failed.

So begins, Tim Gee’s new book Counterpower, released last week which asks the question. Why do some movements bring about transformational change while others fail?

It’s a question that many campaigners grapple with and the book provides much food for thought about what might be the key to success, looking back at the experiences of campaign movements from the last 100+ years.

For Tim, the answer is a clearly articulated theory of change that runs through the book, the idea of Counterpower. Tim argues that change happens when people use;

Tim suggesting that many of the most successful movements for transformational change have used all three kinds of Counterpower, while those that have fallen by the wayside have only used one or two.

It’s a sweeping statement and one that’s perhaps unfair,  for example the anti-poverty movement in the UK has achieved much in the last 15 years, perhaps the most high-profile example being the Jubilee Debt Campaign that saw the cancellation of billions of dollars of debt, with most of its tactics focusing on Idea Counterpower, but his theory is well argued.

The book explores how to apply these Counterpower principles to a number of successful campaigns in the last century. Ghandi’s camapign against British rule in India, the Anti-Apartheid campaign in South Africa, Universal suffrage in the UK and most recently the Arab Spring in Egypt. Each of the case studies are well researched, approaching the information from a new angle and helping to provide fresh insight to even the most well told of campaign examples.

I would have liked to have seen the book make an attempt to apply the principles of Counterpower to some less obvious contemporary movements, perhaps struggle for gay equality in the last 30 years or the anti-roads protests of the 80s or even some smaller scale campaign for justice at a local level.

I’d also like to have seen some analysis of why other campaigns have ‘failed’ because they haven’t made enough of Counterpower. One movement that comes to mind that would be fascinating to explore would be those working for climate justice, where has it failed to make use of Counterpower? I’d also have welcomed to some more reflection on what impact that current trend for ‘clicktavism’ might have on the use of physical Counterpower.

Tim presents a challenge to those campaigning organisations that focus on idea counterpower or perhaps dabble with economic counterpower by encouraging boycotts to consider if ‘stronger’ tactics need to be applied for change to be achieved. However I wonder at times if he’s too dismissive of the role that these organisations can play in helping to bring about change, overlooking the fact that many campaigns are ‘won’ by coalitions of organisations who employ different tactics, although as Tim points out in the introduction these ‘traditional’ organisations have often found ways to support more , citing the example of WWF helping to pay for the first Rainbow Warrior. But even with that the book lays down a challenge to these organisations to consider if the current suite of tactics they are using are working.

The other thing that I really enjoyed about the book is that its written by someone who’s a campaigner. It means that this isn’t an academic text, but you sense a living account of a campaigner grappling with ‘how change happens’.

In summary, I’d highly recommend this book. It’s a great read, well written, excellently researched and provides much food for thought for all campaigners, not simply those who would consider themselves ‘radical’.

With the birth of UK Uncut in the last year, events in the Middle East & North Africa and the #OccupyWallStreet demonstrations, Counterpower provides a timely and fresh look at how change can happen when we reexamine our understanding of power.

Counterpower: Making Change Happen can be purchased here. The author, Tim Gee, is currently on a speaking tour around the UK, dates available here.