What happened when I said ‘YES’ to every email from an online campaign platform?

What would happen if I just said YES. Inspired by Glyn Thomas who signed up to 100 charity emails and finishing reading Analytical Activism by David Karfp, which looks at the approaches online platforms use, I set myself a little experiment.

What would happen If I signed up to the email lists of some of the biggest campaign platforms and just said ‘Yes’ to whatever landed in my inbox?

I’m doing this because I want to learn from the best. My hypothesis – getting very scientific here – is that because the online platforms have the most resource and they rely most on emails to mobilise their supporters that they’ll be at the cutting edge of how to get me to take action again and again!

But I’m also interested in how quickly could I ascend to a super user status, who is making the user experience the easiest, what would I be asked to take action on, what’s the welcome journey like (as Glyn points out ‘The first 8 weeks are crucial to building a relationship with a new supporter, even someone who has just signed up to receive emails’) and what else I’ll discover.

The rules I’ve set myself are simple. Sign up to join the campaign via their website not via a specific action, say yes to anything that comes into my inbox that I can do, donate the smallest amount when asked, don’t do the share asks following taking action, but do everything else.

So 3 weeks ago I signed up for Sum of Us, Avaaz, 38 Degrees and WeMove.EU – the four big online platforms if you’re based here in the U.K.

So what have I found in the first few week?

1. Signing up – Really easy to do for Avaaz, Sum of Us and WeMove. Boxes on the homepage just needing key information (name, email, country) from me. 38 Degrees was more difficult – actually really difficult. The homepage had a video about Bees it wanted me to watch. Fine. I did but at the end no ask to join or take action. In the end, I found the first petition being promoted on the site (to George Osborne to only have one job!) and signed that.

2. Welcome journey – I got instant automated welcome emails from all the platforms. All with a variety of request to share via social media.

But Sum of Us was the only platform that felt like I was taking me on a ‘welcome journey’, and it was super smart. An email welcoming me and asking me to hit reply so their emails would always come into my priority inbox (see below) arrived about 2 hours later – sensible because as Glyn found that ‘there was a roughly 50/50 split between emails ending up in the priority inbox and ending up in promotions’, then another about 12 hours later welcoming me to be part of the movement.

3. Frequency of Emails – It took a couple of days for the first emails to come into my inbox but 3 weeks later I’ve received the following;

Since starting the experiment we’ve had a General Election called in the UK, but Sum of Us and 38 Degrees have been the only platforms to mention that.

My sole emails from 38 Degrees they asked me to complete a survey about my priorities for the election. It’ll be interesting to see if that affects the future emails I get from them. As an aside despite ‘winning’ the campaign on George Osborne and his jobs I’ve not had any feedback that my action helped.

Avaaz went hard early on with 2 emails in 3 days, both on animal welfare campaigns, but then went dark for 2 weeks before asking me to donate.

WeMove haven’t actually asked me to take an online action yet – and to be fair to WeMove they are a whole lot smaller than the others in the test – but sent me a neat report back email, a donation request to support a day of action in May, and then invited me to get involved in that day of action in my community.

Sum of Us has definitely sent me the most emails, almost one every day of the experiment. Most have been linked to their campaign against Bayer and its merger with Monsanto – a bunch have had a focus on bees again linked to the merger. They also invited me to a webinar on the Snoopers Charter, and encourage me to register to vote (an action I didn’t take as I’m already registered to vote).

4. Types of Action – Online platforms are often criticised for focusing too much on getting people to sign petitions, but I’ve been surprised at the breadth of actions I’ve been asked to take over the last 3 weeks.

Sum of Us have definitely been the most active at asking me to be a donor – within 2 days I got my first ask, then after my third action I got asked to consider becoming a regular donor – which suggest some impressive database automation. Although there was also a time when I got two donation emails within 15 minutes of each other, but they’ve also made it really easy to keep donating now I’ve signed up with 1-click giving.

We Move are the only platform to have provided feedback to me via email, and as I mentioned above they’ve been most active in getting me involved in offline activities pushing a day of action.

Sum of Us offered this really nice page telling me how my action is part of the wider campaign after I took one of the bees actions;

Sum of Us have also repeadetly asked me if I’ve got any more connection with the corporate targets I’ve been taking action towards; 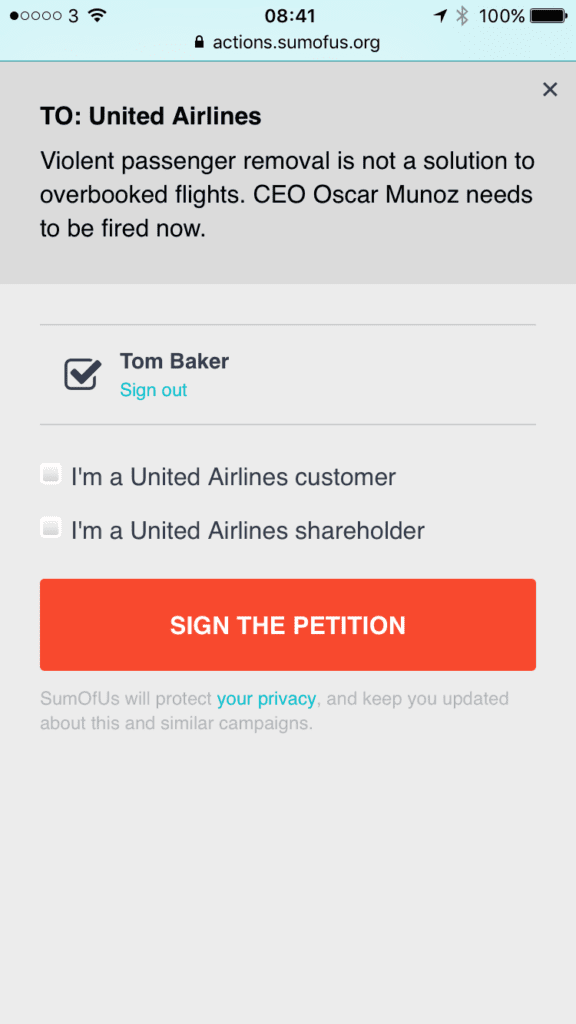 While I’m intrigued by the share numbers that Avaaz throw up after an action. I’ve no idea if they are real or randomly generated;

What next? I’m planning to keep the experiment going for the next few months, I’m interested to see if I get to a point when I get an action a day from every platform. I might also throw in a few other organisations – feel free to make suggestions of who – but I really recommend anyone signs up to a few email lists. I’ve definitely seen a few things I’d like to borrow for my own campaigning.

Fascinating experiment Tom!
Have you got an instinct as to what frequency of communciation feels the most effective? Eg is almost one a day from Sum of Us too many? (I expect every recipient’s different though.)

Thanks! I’ve seen some Engaging Networks research that suggests 1 or 2 times a week, but suspect it depends on the content/supporter journey.

No worries – some useful material in this presentation – http://ecflive.fairsay.com/ecf17-day-2/which-nonprofits-are-exceeding-digital-expectations/

Love your experiential analysis here! Am sure the platform strategists will read this with a lot of interest.

If you’re interested, I’ve been tracking Avaaz and Sumofus’ ability to raise their budgets through clever micro-financing appeals and did a piece on that here: http://mashable.com/2015/11/29/corporate-activism-crowdfunding/

This is interesting, thanks Tom! I am a Campaigner for Care2 in the UK and we’re working on improving our welcome series right now, testing different approaches. Would be great if you included Care2’s user experience into the mix.

Tom, add GetUp! from Australia to your list. They’re very switched on.

I know you’re looking generally at the experience and user journey, and I’ll be watching to see what you think over the next few months.

Tom have you also tried change.org or GlobalCitizen.org or Greenpeace.org or One.org ? I’m signed up to all of them and they all do a pretty good job of campaigning.

Good experiment , but too many emails is repulsive for me and really all what I want to know is if they are real and efficient to know it I am investing my money at the right place.
Also why spread the effort when I feel they both sum of us and Avaaz are about the same causes or if not why not join efforts?