Speed, Sophistication, Structures and Space – 4 trends that will define the future of campaigning

In my role as Head of Campaigns and Engagement at Bond, I was ask to write about the trends that will impact the campaigning of members over the next 5 years, and what it means for our work to support members to campaign brilliantly. I came up with the following;

1 – Speed
The first campaign I was involved in was Jubilee 2000. I remember the record breaking petition, the sense of excitement as the latest Christian Aid News would come through the letterbox with an update, and the delighted when we heard we had succeeded in getting the G8 to cancel the unpayable debt.

It took the Jubilee 2000 campaign over 2 years to collect the 22 million signatures that formed the record breaking petition handed to G8 leaders. Anyone who collected those signatures will talk of the hours spent collecting petitions in churches, at street stalls and in student unions bars across the UK, winning the signatures one conversation at a time.

Fast forward to today, where it’s possible for a partnership between Guardian and Change.org to generate 250,000 signatures on FGM in 20 days, and many Bond members are able to generate tens of thousands of emails in a matter of days or weeks. Campaigning organisations able to launch a campaign in a matter of moments in respond to the latest event or news headline.

But while campaigning is getting faster, we’re also seeing a rise in slow activism? Organisations like the One Campaign and Tearfund are encouraging supporters to write handwritten letters to MPs around the recent legislation on 0.7% or All We Can encouraging supporters to stitch mini-protest banners ahead of London Fashion Week, part of creative ‘craftavist’ movement, which encourages reflective action that seeks to change the participant as much as it does the world. I think we need both within our movement, and a willingness to learn from both approaches.

2 – Sophistication
We know more about our supporters than we ever have, what actions the like to take, what topics they’re interested in, if and when they’ll open their emails from us, and as a result we can target our campaigns in more and more sophisticated ways. A recent report suggested “neuro-campaigning” following politics and advertising to use a better understanding of how our own brains work to persuade people to take action. With all this evidence, as campaigners we need to continue to invest more and more in testing of our messages and tactics before we share them.

A focus on what tactics to use, shouldn’t mean we overlook the importance of theories of change at the heart of our campaigning, including challenge ourselves to ask if we’re too focused on targeting our campaigning towards MPs, Government Ministers and UN bodies, or if we should follow Action Aid focusing on local councillors, or corporate divestment championed by Share Action and 350.org, or local media like RESULTS. 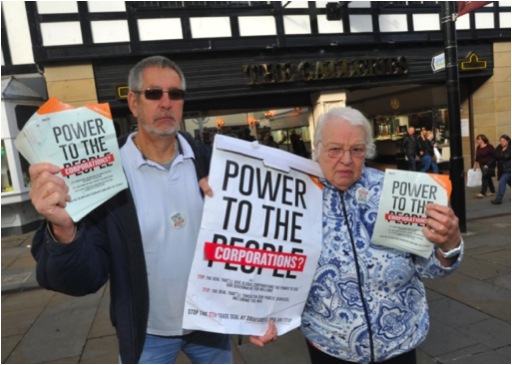 3 – Structures
As much as we need to build campaigning structures that are fit for a digital era, we shouldn’t overlook the importance of investing in an active and vibrant grassroots network. For me it’s always been the hallmark of our movement, the local activists that collect names on petitions and meet with their MPs.

I want to learn from groups like 38 Degrees, about how they mobilised 10,000+ volunteers as part of the Days of Action on TTIP, or Toys will be Toys, an entirely volunteer led campaign about how they’re successfully joining up offline and online actions.

A focus on structures should not only be about how campaigns are organised, but also about challenging the very structures that perpetuate inequality and poverty. While we should take advantage of opportunities like the recent Private Members Bill on 0.7%, but the danger in focusing on ‘the little big thing’ is that we risk not building public understanding about the root causes of poverty that should be central to our campaigning.

4 – Space
The Lobbying Act or comments by the former Charities Minister that we should ‘stick to knitting’ reinforce to me that we’re seeing a narrowing of the political space campaigning organisations have to advocate. I believe we should feel proud as a sector of the positive impact our campaigning has had on the lives of the communities we work with. We should all fight to protect it.

Before starting at Bond, I helped to found Campaign Bootcamp, a training programme for those looking to start a career in campaigning. We were overwhelmed by the generosity and enthusiasm we found to help us. That experience has shown me the strength of the community we have, committed to work together to share and help each other.

This is an edited version of an article first published in The Networker available here.

I LIKE WHAT YOU SAY. stick to basics that is people at the grassroots. please see my site if you have minute .
http://www.gopushgo.co.uk
I am undertaking a programme to train young health leaders and would be grateful to have a conversation and seek advise and help.